out of garage so here's a couple picts. of the 68

This 68 has no title but I'm fairly confident that when/if the DMV reopens, I should be able to get one.
My question is, not having any personal connection to this car and, sorry to admit, I am financially not doing well. I am only in it for the money. I want to part it out as it should bring more than selling it whole 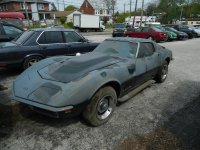 What would you do? I think the motor MAY be correct but not sure[#3956618]. JUST brought it home. I hate to destroy an original car but it appears to have some mods and I'm sure it's worth more in parts than whole. It has this tiny Holley 4 bbl that looks like it was original to the car. Did they offer a Holley economizer or something? 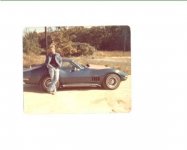 Have to ask. I had those pipes on my 67. Took a girl to the prom and when she got out, it fried her dress to her leg. Spent the night in the ER and never made it to the prom.
Any issues with you pipes?

Yup,fried a few legs & hands,had Thrush side pipes on my old 70. BTW,I was born & raised in Philly so been up in your neck of the woods a few times tearing up the Sure kill Exp. Gladwyne & Valley Forge were my favorite Exits.My old 70 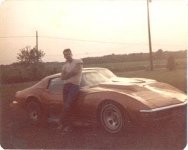 I'm thinking you can turn it as is for more than you got in it. Yea, by parting it out you might get more, but, it's a lot of work doing that... just a thought.
2007 Atomic Orange Coupe Cashmere/black interior

Fwiw,there maybe no title.around that time,the registration was the title.check with your DMV.if there open or look on there website to see if it needs one

Sent from my moto z3 using Tapatalk
Bill and Gail...save the wave

bill81vette said:
Fwiw,there maybe no title.around that time,the registration was the title.check with your DMV.if there open or look on there website to see if it n

I'm actually on the Phoenixville/Valley Forge border and rarely head towards the city. I'm more country oriented and head west or north but I do head towards Philly sometimes to check out a new brewpub.

Unfortunately, there's no DMV in Pa. right now. I'm really surprised being a government office and in today's world, they do almost everything on-line.

This MAY offend some but when I do research on something, I like to go to as many related forums as I can. I've tried to register to "Corvette Forum" and they keep sending me a "need to complete registration" email. It says to "click here to complete registration" but it doesn't highlight so it doesn't work then it says if it doesn't work, to contact them and when I try, it says I can't because I'm not registered.
A real catch 22. I'm hoping there are others here that, like myself, want to get as much information from as many sources as possible that belong to that forum? IF there is can could you possibly contact them and explain my situation as there may be others in the same boat and they may not be aware.
Thanks again,
Karl.
Click to expand...

Oh, another question. It has a temp Delaware tag on it for 1986. I believe years ago anyway, New Jersey only required a registration to sell a vehicle. Not sure if it's still that way but does Delaware need a title or just a registration?

Found the title. Now that I have it, I am less likely to consider parting it out. I would really like to sell it as a 34 year old garage find rather than chop it up even though I could make more parting it. IF it has the original motor[probably the lower HP], what's an average price I should ask for it.

Are you sure that car isn't a 69? That block casting number is for a mid 69 production Corvette 350. I ask because of the engine casting number. The Stingray emblems on the front fenders and the side pipes. All 69 stuff. It would be easier to give you an idea of value with more information on how the car is equipped and condition of the frame ect. Also check the stamped number on the front of the passenger side block pad just in front of the head. There should be a vin stamped on it that matches the car's vin and an engine number starting with a V and ending with a 2 letter suffix.

Tom Bryant said:
Are you sure that car isn't a 69? That block casting number is for a mid 69 production Corvette 350. I ask because of the engine casting number. The Stingray emblems on the front fenders and the side pipes. All 69 stuff. It would be easier to give you an idea of value with more information on how the car is equipped and condition of the frame ect. Also check the stamped number on the front of the passenger side block pad just in front of the head. There should be a vin stamped on it that matches the car's vin and an engine number starting with a V and ending with a 2 letter suffix.

As soon as I walking in the garage, I saw the "STINGRAY" script on the fenders and thought it was a 69 also. Once I checked the title and VIN# on the windshield post, I knew it is a 68. VIN #19437854*****.
I looked up the block # and as I understand, it was used for several years including 1968 but it has this tiny Holley 4bbl. I've never seen one that small before. It has no side tanks or what ever they are called. Reminds me of an Economaster carb of the 70s. Did GM use factory Holleys? 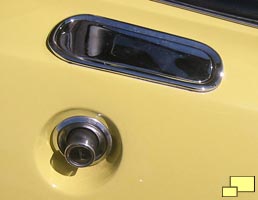 68 DOOR. The org owner of my old 68 added the Stingray emblems. Also the Ign switch is in the dash.I"m thinking 40 + years back so my memory is a little off maybe a lot off/lol !
Last edited: Apr 29, 2020
Currently 93 Ruby 40th Anniversary Roadster/6 SPD

It's been 40 some years since I had my 69. The handles on this Vette look like your picture. Did 69 look the same? No reverse lights in the taillights. I THOUGHT in the late 60s that GM moved the IGN switch to the column? It was dark in the garage and I only saw that the column looked to have been tampered with so I figured the IGN was on the column. Haven't looked at the car since it was pulled from the garage other than take a couple picts and cover it up.

Again, did they put a build plate on Corvettes and if they did, where would it be? Something that might show the options although I think this was a minimum optioned car.

The sure fire way to find out what ya got would be the "build sheet" thats on top of the gas tank if it hasnt deteriorated. The push button door & dash ign switch is only on the 68.
Currently 93 Ruby 40th Anniversary Roadster/6 SPD

68 had the push button door handles like wayback posted,69 had just the top flipper type,68 had the ignition switch in the dash,69 had the ignition switch in the steering column,68 had clear SM lamps and turn sig/park lamps,69 had amber,68 had no script on front fender,69 had Stingray script on fenders,68 had no chrome bezels in side fender gills,69 had chrome in side fender gills. Hope this helps,I've slept many times and 44 years since I owned my 68 roadster!~! LoL!
Last edited: Apr 30, 2020
It's got so it seems to me that the Internet has created a lot more Horses A$$'s than we have Horses!

68 Tail lights,had to velcro the Rug Rats to the rear deck. 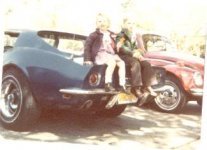