C7 Stingray getting to be pretty common. 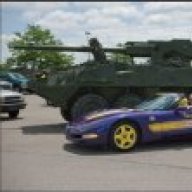 I live and work in the vicinity of the GM Tech Center in Warren, Mi. for months now I've been seeing the new Stingrays almost on a daily basis. They are really awesome!! I think they have caused as many accidents from people trying to get a pic of them with their cameraphone as texing does!
This morning on the way in I was following a red one, but it had regular plates on it! No manufacturer plates (as every C7 that I've seen so far had), but private plates. It was a busy three lane road and the Vette was in the left lane and he and someone in the right lane were trying to both get into the middle lane at the same time. It was a near miss as the Corvette hastily retreated to his own lane. Where in the world do you go get your pre-production Vette fixed? Could you imagine how expensive that would be at the dealer? Now I'm sure it had to be someone affiliated with the Tech Center and they would fix it somehow, but it did have private plates .. . .

In my opinion, the black on the rear end is not as prominent in person. Just the angles or something .. . .car looks REAL good!!!!

Tank
You must log in or register to reply here.