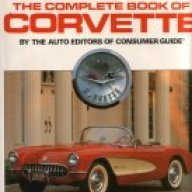 I'm not new to Corvettes, having had my first, a '58, at age 19 (it only cost $750 and I had passed up a '57 because it was too expensive--$1,000). Since that time, I've had a '64 coupe, a '69 roadster, an '88 targa top, a '95 targa top, a '99 roadster (which I still have and love), and my newest one, a '57 fuelie. Just bought the '57 about a month ago, but it took a couple of weeks to have it transported to me from PA, so it's been around the house for only about a week and a half. This one is Venetian Red (I'm very partial to red) with beige coves and red interior. It's an early '57 (serial number ending in 646) numbers-matching car with original 3-speed, soft top, and hard top. Besides being fuel injected, which is pretty neat in itself, the car has been pictured on the covers of two books and featured inside three books. All the books were published in the late 1990s by the auto editors of Consumer Guide. I've had one of the books (see picture) for quite a few years and always admired the car on the cover, never imagining I would own that very car some day. Ironically, about 6 weeks ago, I went down to my basement to bring another Corvette book or two upstairs to further my research towards buying another Corvette. Although I didn't know it at the time, one of the books I brought up was the book with my next car on the cover. That night I looked at the pictures of that car and wondered if it was the same car I had seen in NJ a couple of weeks earlier, but no way to know. The next morning, as had become my routine, I continued my on-line search for my next Corvette. I soon spotted one I hadn't seen before--it was in PA. I noticed that one of the pictures in the ad was of the cover of the book I had. Then I read the ad and found out that this was the cover car itself and it was for sale and it was close enough to go look at it. I wasted no time to contact the seller's agent and make arrangements to see the car. Well, I bought it and now it's in my garage. I'm already having a lot of fun working on it and am looking forward to driving it in the very near future (once I'm sure everything is right). Never having had a Corvette this old and never having had Rochester fuel injection, I'm sure I'll be asking some questions of the CAC membership. And maybe I'll be able to help other members along the way. For example, I just refurbished the 3-speed shifter with a really cool fix that erased 54 years of wear and didn't cost a cent. I'll be happy to share the details with any 3-speeders out there.

Interesting tale about your new 57!
Thanks for sharing the story and photo - and welcome to the

So cool, I've always admired that Corvette myself (I've had that book for many years too).

Welcome to CAC and I'm sure you have some knowledge with your experiences with your other cars.
2007 Atomic Orange Coupe Cashmere/black interior 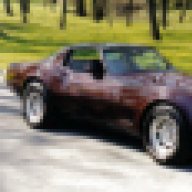 I'm jealous. I love that car.

Welcome to the CAC.
All fast cars are fun but, an old Vette is a work of art.

Cool! Welcome to the CAC!

What a cool Vette to own!

You will have a great time here!

Just do not forget to SAVE the WAVE!

Welcome to the Forum PeterR.

You have a beautiful Corvette. I have had that book on my shelf for years. Glad to know it is still in good hands.
[SIGPIC][/SIGPIC]
NCM Lifetime Member


PHP:
Welcome aboard, we're sure glad you decided to join us, what an awesome story of just meant to be, also an aswesome piece of :BOWCorvette history at its BEST

What a piece to add to your collection, I am jeolous for sure.