Does anyone in the US have a C2 corvette like this?

I purchased this C2 roadster about 3 years ago. I owned a 65 about 50 years ago and this was so unique I couldn't turn it down. The family of the fellow who built it did contact me with a little info about their dad who built it.

So my question: has anyone in the U.S. built another one like it?? 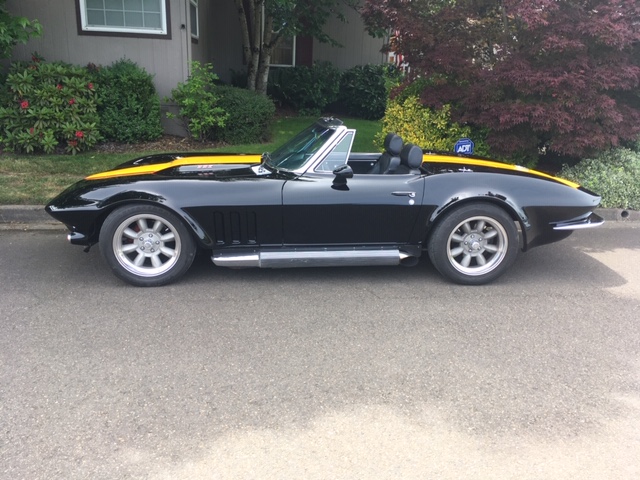 Kent Olsen out in Oregon
K

Got a contact from a friend yesterday who has worked on old hotrod cars all his life and has a great memory of them.
Talked to him last night and he agreed that this is probably a one of a kind. I do have the history of the installation of the Chrysler running gear. The fellow that did it all's daughter and son contacted me with some information and a few pictures. Possibly could be worth an increased value, but I'll be giving my old cars to my kids and grandkids so the value is not what I'm interested in.
K

Well I've had this comment in here for nearly six months with no response. Guess that means there's not another similar car around. I was just curious. I'm not a Chrysler guy but I will say this old Hemi is a great cruiser. She just lopes along, you don't even have to downshift going up hills in 5th gear (overdrive).

I've done some tinkering to make things right in my eyes and ears. I will miss the warm summer months when I can run into town, go to a car show or just take her out for a drive.

I'm sorry I never saw this post before. An iron hemi in a C2 is truly unique, I've never seen one before. I had a Chrysler hemi with dual 4s in a 1947 Ford coupe. Owned it for 21 years before I sold it. I'd really like to see some engine compartment photos if you would.

I'm going to move this thread to the C2 Forum for more attention.

Never heard of a old Hemi in a C2 street car, seems I remember one, back in the day that was a race car....might have been this one.

Kind of like Mike Finnegan (Hot Rod Garage fame) has the 55 Chevy with the Hemi in it.... he calls it BlaspHemi.

Here's some pics of the engine and rearend. 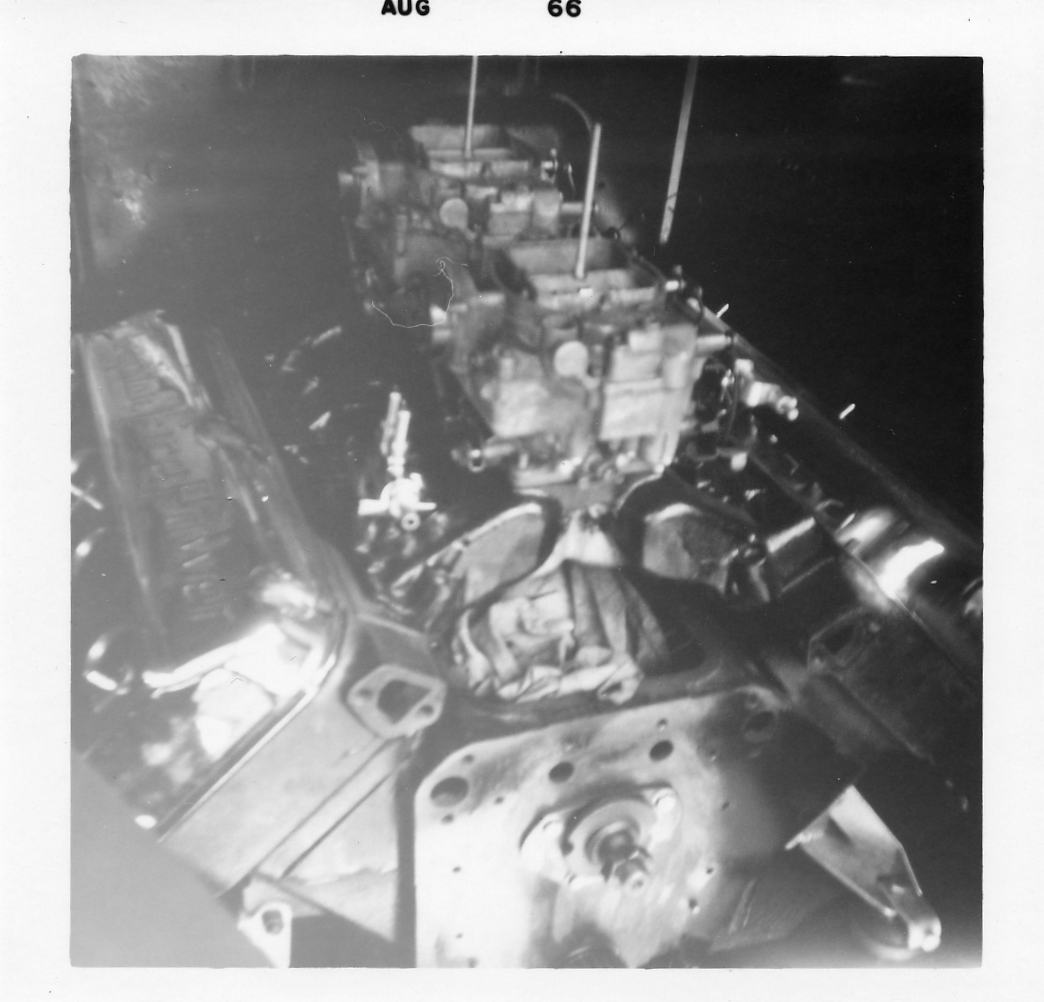 The info I've received from the original owners daughter is as follows. Bob Simanek, living in Pittsburgh California, just east of the SFO Bay area, brought the car home in the last 70's. He installed the Hemi engine, Chrysler 4 spd and the Chrysler solid rear end. Finished the car in the early 80's, fabricating some parts to make it all fit. Drove it a little to car shows but didn't use it very much. After he passed away the car was sold to Robert Silva, an old friend, who just kept it with a few other old cars he owned. That was back in 2011. I talked to Mr. Silva after he put the car up for sale on commission with Specialty Cars in the Bay area. He said he hardly drove it as he had a real "Cobra" which was way faster.

I bought the car in 2016. I'm not a stock kind of guy so I liked the totally out of the normal box this car was. I like to tinker with old cars, I have a Classic Mini Cooper and a 72 Porsche 911, so this was just what i was looking for. I did own a 65 Vette between 1970 and a new job in Las Vegas, 1983, unfortunately where it was stolen. As a tinkerer I've added 17x8 (8 spoke) wheels, rebuilt the dual Carter AFB's, modified the distributor, installed a TREMEC 5spd, replaced the rear drum brakes with disc's, installed 4 link trailing arms and coil/over shocks. The car was painted the color of my old Vette as well as adding a little 'ducktail'.

At this point I don't think you will find another like it driven on the street. Compared to the little 4 cyl in the Mini and the 6 cyl in the Porsche, that old Hemi is what we used to call ( a thumper).
V

This is my '63 Grand Sport racecar replica. Last year it was gutted, a lot of resin was added to fix cracks in the floor, added dynamat insulation, an Ididit chrome tilt steering column, added power to the rack & pinion steering, and I added a Chevy Performance crate engine & transmission (LS3 with a hot cam rated @495hp and a T56 super magnum 6 speed stick. This sits on a 4" tubular frame and a C4 suspension. Many other smaller changes were made, such as LED headlights and passenger side mirror. This year I moved the headers coming from underneath the car to exiting the fenders to join the sidepipes. 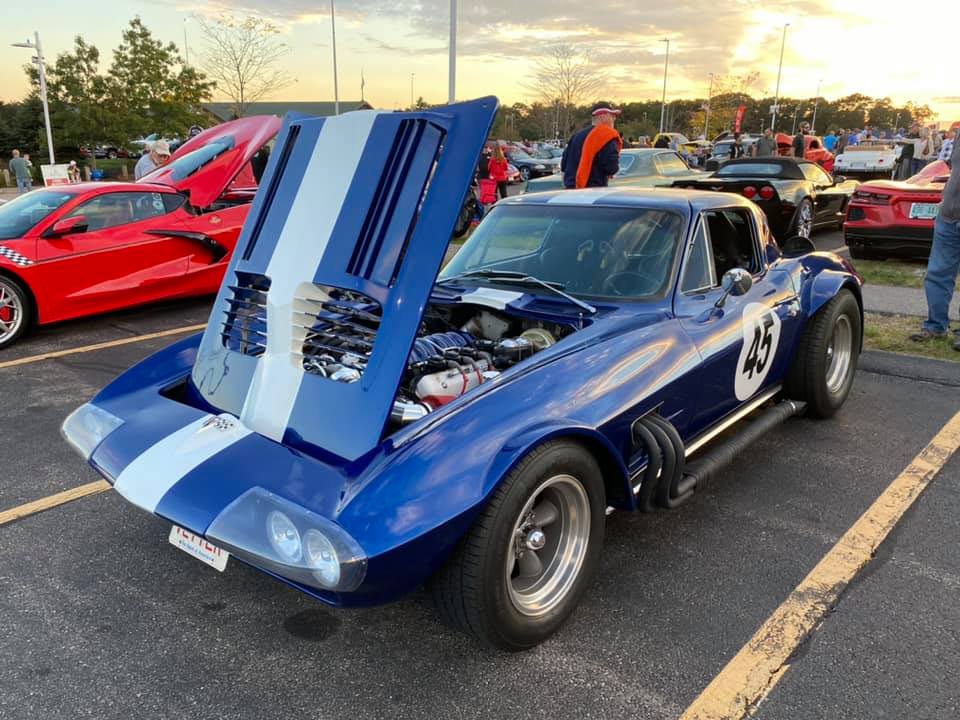 I'm old enough to remember those Grand Sports racing when I lived in Calif. I seriously looked at buying one when I retired until I stumbled onto my Hemi/Vette. C2 corvettes where one of the best looking models but I'm still a racing fan so I like the changes made on them.

Toms007
Lot's of airplanes in the background, are you a pilot?

I was fortunate enough to see real Grand Sports compete in vintage racing at Mid Ohio quite a few years ago along with some other well-known Corvette race cars. Of course, that was back when owners still got them out to play occasionally

Well next month will be a year I've run this post with no one replying they've seen another Hemi/Vette street car. Answers my question as to how rare this old girl is.. Great! I'll still keep driving on sunny days and showing off.

I like the unusual and my cars show that, (each modified to some extent) so the Hemi/Vette fits right in.