First off, I am new to the site and very impressed with the members and knowledge base!

Finally took my 80 vette out of the garage after a 3 year period, and found the rad is gone. In replacing the rad, I am now going to install all the missing rad seals and rad support to hood seals. I am doing this since I have been having troubles with overheating in the past.

Previous owner removed the stock Air Cleaner and the duct which sits over the rad and the other duct which runs on the right side.

Luckily he kept them and gave it to me when I purchased the vehicle.

I would like to install the stock setup but am having trouble determining how the duct sitting on top of the rad support is to be mounted?? Can someone give me some guidance?? Some close up pictures would be great!! Also what hardware (screws/bolts) is required...

I see the three mounting holes in the duct (2 on left, 1 on right) but they just don't seem to line up to anything. The other confusing item is if the seals pointing towards the engine are to be under the duct or over it?? Since the seals where missing to begin, with its hard to see.

Not a lot of the Shark owners hang out here late at night (at least by Pacific standards ), but someone will be able to answer your question by morning I'll bet.

Glad to have you aboard!

I hope this doesn't mean that everyone has removed their stock air cleaner setup ...

I'd really appreciate some help on this one.

Chris..... I have a sketch I recently did and had scanned as a Word doc. that shows general locations of the rubber bumpers. It does not show a more detailed view. Let me get my Assembly manual out tonight and see if I can find some exploded views that would help you out. If so, I'll get one of my tech-aides to scan it and I'll email them to you. Stay tuned, let me look tonight.

I have my stock set-up but have no access to digital camera.sorry.maybe one of these days.

If its the same as a 77, I can take some pictures for you. Let me know.

Bob,I think he has the dual intake air cleaner on that car.Yours is probably single unless its an L82

It is a single. Sorry I can't help.
S

I had to have the stock setup installed on my 80 when I bought it, but I didn't do it myself. I'll shoot some pics Saturday and post them here. After you look at the pics, ask away and I'll try to help.

Much appreciated, looking forward to those pics...

Looks like I may also need help with the missing front lower spoilers and air deflector (aka center spolier, air dam, seems like everyone calls it by a different name)

Chris, I hopes this helps. If not, I can e-mail you full size pics, but they're big files.

Let me know specifically what you want to see and I'll get more detailed shots for you.

Much appreciated, this certainly helps a great amount. As you suggested, it may be better if you can email me the fuill size pics.

I am specifically interested in how the duct mounts to the rad support and was hoping to zoom in on it.

I have been zooming in on the pics...

Looks like the center duct mounts right under the rad support, is this correct??

Previously tried this but it was hitting up against the condensor and seemed such a tight fit, so I thought it was on top. Hmmm.. may have to loosen the condensor from the rad support.

Also, noticed the foam seal running across the top of the rad support, how do the ones which point in to the engine compartment mount??

Thanks for all your help so far! 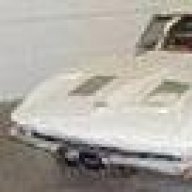 As it turns out I reinstalled my ducts today on my 1980 ex-L48. The original L48 and TH350 were pulled and a crate motor installed.

The larger duct does mount between the radiator and the core support. There are two screws on the driver's side and a single screw on the passenger side all of which screw through the radiator core support and into metal speed nut clips on the duct. The screws used have a 9/32 head, are about 1" long and have a 5/8" flat washer attached. The duct on the passenger side mounts via two screws in the two oblong holes in the engine compartment drip rail just forward of the radiator overflow tank, and a third screw which goes into the receiving end of the center duct near the radiator cap. Partially attach the side duct first, install the center duct then tighten everything up.

The rubber seals are about 9"long and sit on the two outboard duct rails forward of the radiator, on the core support and end on the engine side of the center duct. These seals are contoured to fit, the thick end is towards the front and the thin end is nearest the engine. After insatlling these two seals there are two more which run along the radiator core support from the hood hinges and end at the previously mentioned seals. For the last two mentioned seals I used "live rubber" seal material to fabricate my own as my origianls were badly decomposed and the aftermarket relacements are too expensive.

Much appreciated, I have this all figured out now.

I am curious about this "live rubber" material of which you speak. What is it? Where can one get it??

I am about to order the aftermarket kit since, all the seals are missing on mine (rad support and hood!), but I am still interested for future use or other places.

I'm not sure where it came from but I can find out on Monday. Mine was obtained through where I work; a steel foundry. The Maintence Manager called one of his suppliers and they sent me a strip about 2"x 2" x 6' long; a case of RHIP.

One of my vertical seals between the core support and the radiator was damaged when I pressure washed the engine compartment for painting before installing the new engine. I cut the remaining good seal into four blocks to use as spacers then wedged the new "live" rubber seal between the radiator and the support starting at the passenger side bottom and ran it up to the top, under the center duct then down the driver side. My radiator is now completely sealed against air bypassing the radiator. At the local Farm&Fleet they sell a spray 3M rubber adhesive that sticks very agressively when you leave both contact surfaces cure for a minimum of 30 minutes.

I'll send a reply with the sealing material supplier on Monday.

Sorry but I was called out of the office on a customer visit today. Before I left I asked the Maintence Manager to check with his supplier. I didn't have a voice mail from him tonight so I'll try to post on Tuesday before I leave on a two day road trip to Iowa to visit customers.

Chris, all done? How did it work out?