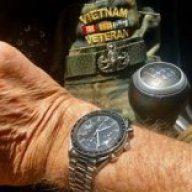 I never thought I’d be getting another Corvette, I’m in my 70’s. Purchased my first, a 56 in 1961. It was followed by several more C1s. Then came the C2s, several from 1963 to 1966 including a B Production SCCA car with a couple of spare parts cars. The newest I ever had until now was a 70 LT1. The last one, a 1964 coupe, optioned with all the Z06 parts except the NO3 was sold in the late 1990s after a divorce. My Son decided about a year ago we should do one together so, after some searching, we settled on a 2007 Ron Fellows #219 with 13k miles and still smelling like new. Having the heads looked at next week and looking forward too many trips to IMSA or F1 races with my Son. I'm hoping this is the start of a long relationship with this Z06.
Thank you for allowing me to join you.
Last edited: Nov 9, 2019
"Would the child I once was, be proud of the man I’ve become?"

You're never too old for a Corvette! Welcome to the Corvette Action Center!

Thank you!
"Would the child I once was, be proud of the man I’ve become?"

Another welcome & THANKS for your service.
Currently 93 Ruby 40th Anniversary Roadster/6 SPD

Welcome to the CAC. I'm also in my 70s and have had my '59 since '69. Others have came and went but the '59 is family. It may even see the road again someday. Congrats on the Z06. I hope you and your son have a lot of great times with that car.

L
New Member from FL - back in a Vette after 10 years!

CORVETTE RACING AT SEBRING: Drive for Ninth Win in 12 Hours